The typical glass pipe or water pipe is comprised of a number of key components, all of which add to the functionality of the device. With so many different components, it can be difficult to figure out the names and functions of the different pieces. Here is a run-down of some of the more important components of a glass water pipe.

Ash Catcher – An ashcatcher (also known as an AC or pre-cooler) is an attachment that fits into a pipe and serves as a bubbler. As the name implies, the function of the ash-catcher is to catch ashes and prevent them from accumulating in the main chamber. It also adds another percolation stage to the water pipe.

Borosilicate – Borosilicate glass is widely used in lab equipment, cookware, and smoking implements. Its low thermal expansion coefficient makes it suitable for situations wherein the glass will be subjected to high temperatures.

Bubbler – A bubbler is a water pipe that is generally smaller than other similar devices. They do not usually have a removeable bowl, and the chamber is instead emptied by releasing an air hole. You can fill a bubbler with water to provide some filtration and cool down the smoke before inhalation.

Carbon Filter – The carbon filter serves a similar function to the slide, although it is usually smaller. Like a slide, the carbon filter is designed to fit into a glass joint. Although usually filled with organic carbon, carbon filters may also be made of organic cotton. It serves to filter out impurities in the smoke, resulting in a smoother sensation and better-tasting herb.

Diffuser – Diffuser is another name for the downstem of a tube or water pipe. Most downstems feature only a single hole through which the smoke passes. Diffusers, on the other hand, typically have several openings, which may be slits or showerhead designs.

Downstem – The downstem is a glass stem that fits into the pipe chamber. It is usually removable, with one end featuring a diffuser section, and the other a large opening where the slide fits into. Also called a ‘female piece’, the stem is where the slide or bowl is connected. The main function of the downstem is to direct the smoke from the bowl into water, where it bubbles up from the surface and is inhaled by the user. In order to perform this function properly, the downstem has to be slanted in a way that places the top end of the stem higher than the level of the water in the pipe.

Fixed Stem – A fixed stem is a newer alternative to the common downstem. As the name implies, fixed stems are connected to the piece and cannot be removed.

Glass on Glass – Glass-on-glass designs are an alternative to the typical grommet-fitted stem. In such designs, glass ground joints are used in order to create an air-tight seal, with the joints usually having a frosted white appearance.

Grommet – A grommet is a small ring of rubber that fits around the downstem. Its function is to seal the hole in the water pipe in which the downstem fits. 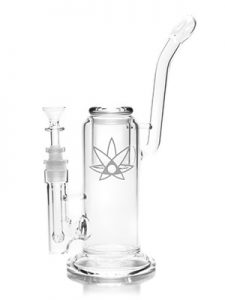 Oil Rig – An oil rig is a specific type of water pipe designed for use with herbal concentrates. Rigs are smaller than typical water pipes and as a result, the smoke has a shorter distance to travel.

Percolator – A percolator or perc is a water-diffusing component that is often built into the downstem or fixed stem. Along with the diffuser built into the bottom end of the stem, the perc provides another stage of diffusion.

Quartz – Fused quartz (also called fused silica) is a type of glass made from silica in amorphous or non-crystalline form. Quartz is made of pure glass, unlike other types of glass, in which ingredients are added in order to lower the temperature at which the glass melts. Because of its purity, quartz has to be heated at much higher temperatures in order to be worked into glassware.

Recycler – Recyclers serve to recycle the smoke before inhaling, filtering it through the water multiple times. With such designs, the smoke is cleaner and travels a much shorter path from the perc to the mouthpiece.

Slide – Also called a ‘bowl’ or a ‘male piece’, a slide is the component of a pipe where the herbal material is packed and ignited. The slide can be made of glass, metal, or ceramic. Depending on the pipe’s design, the slide can be connected to the stem or it may slot into the stem’s opening. In many pipes, the slide is replaceable.

Water pipe – Water pipes are a type of smoking implement in which the inhaled smoke is coursed into the water producing bubbles. After being bubbled through the water, the cooled and filtered smoke is released for inhalation through the mouthpiece.

Check out our extensive range of water pipes and accessories here.