If you use a water pipe, you probably already have some form of percolating device fitted into it. Providing enhanced functionality and a more pleasant experience, percolators are absolutely essential for getting the most out of a water pipe. 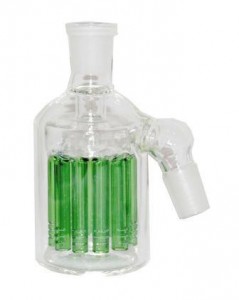 What is a percolator?

What is a percolator, and how does it work? A percolator is a smaller second chamber located in the main chamber of a water pipe. There is a wide variety of percolators available on the market, from pedestals and trees to helixes and honeycombs. Many percolators serve to diffuse the smoke, but not all models do. In essence, percolators provide an additional stage of filtration for the smoke as it passes through the water.

Percolators serve a number of functions. For one, they create a pressure differential between the top and bottom holes. Aided by reduced pressure caused by the inhaling action of the user, percolators cause the formation of bubbles in the water as the smoke passes through. Exposure to the water causes the smoke to cool down before being inhaled. The result is a smoother more flavorful draw.

Percolators also serve to trap harmful or unpleasant-tasting substances from the smoke. While water-soluble substances remain in the water, the active ingredients of the herb pass through freely.

Finally, percolators hydrate the mixture of air, smoke, and vapor that passes through the pipe, increasing its humidity. This theoretically reduces irritation in the air passageways and the lungs.

Most percolator available on the market today fall into one of two categories: tree and dome. There are also pedestal, helix, inline, coil, ring, and honeycomb models, although these are much less common. Over the past several years, a number of percolators have been introduced that focus equally on functionality and aesthetic design.

Coil – Coils regulate airflow by implementing a system of concentric tubing, which also makes the smoke travel a longer distance, cooling it down before it is inhaled. Coils are often frozen ahead of use in order to enhance their smoke-cooling capability. Coils were first used in ‘slow-draw’ types of water pipe traps.

Straight – The simplest type of percolator, this one features a diffused downstem, which is simply a tube with slits cut into the end that goes into the water. This design cools the smoke by passing it through the water before it is inhaled.

Tree – The aptly named ‘tree’ is equipped with multiple arms, which in some models is as few as four and in others is as many as 64. The principle behind this design is that more arms provide more diffusion. Arms may be open-bottomed or they may be closed with slits cut into the sides.

Ring – Rings are simply variations of tree designs, with an upward bent stem affixed to a u-bend. Holes or slits are cut into this u-bend, which wraps around the up stem, enabling users to take slower draws. Rings generally make smoke smoother to inhale.

Dome – Domes are designed with a single cylinder that courses the smoke to the water column’s bottom section. They come with different types of diffusers, with most models featuring triangular holes cut into the bottom. Other models may feature a small number of large holes or several smaller holes around the dome’s bottom. Dome percolators typically provide the first stage of filtration in a dual-filter system. 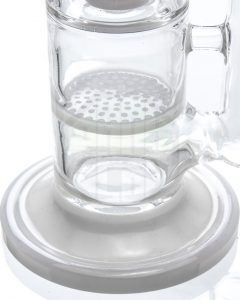 Sprinkler – This designs works exactly as the name suggests. With several holes through which water passes, the sprinkler provides a smooth and even flow of smoke.

Honeycomb – This is a disk percolator with a distinctive honeycomb design. Small holes cut into the disk provide more diffusion than standard disk percolators. With this design, too many holes may result in increased drag.

Showerhead – Showerheads feature vertical tubes that get wider toward the bottom. Slits are typically cut into the sides for added diffusion. 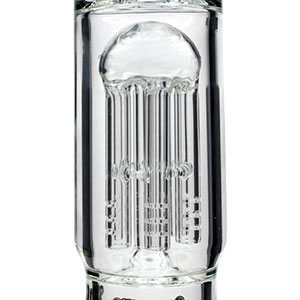 Matrix – Similar to the puck percolator but taller, the matrix features several tiny holes cut into it for optimal diffusion.

Stereo matrix – Two matrix percolators stacked one on top of the other. Although the bottom matrix does not produce bubbles, it serves to displace the water in the pipe.

Swiss – Vertical disk percolators with several holes cut into them allowing air to pass through.

Reti – A design featuring two cylinders, with one placed inside the other. Each cylinder features a diagonal slit opposite the other. Smoke passing through this system is diffused prior to inhalation. 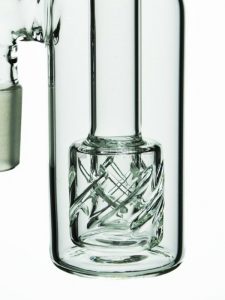 Cyclone – Also called a turbine, cyclones feature a disk with slits cut into the side at an angle, forcing the water to spiral when smoke is inhaled. A cyclones also serves as an effective splash guard.

Circ – A percolator design that features a stack of rings that widen toward the end. The spaces in between the rings provide a smoke-diffusing effect.

Helix – The helix percolator is a fairly unique design. It provides a very efficient and effective way to diffuse smoke as it passes through the water.

Check out our range of water pipes here.